Hi! Welcome to my blog for allergen friendly recipes!

Let me start off my saying that my son has milk, nut, and egg allergies so those will be the only allergens that I avoid. If you or your child is allergic to shellfish, gluten, soy or anything else, my recipes might not work for you.

I will also be posting foods that I have found are safe (in my area, it will always depend on where you live and what production factories that your foods come from, so always, ALWAYS, remember to check labels), allergen friendly companies that you can contact for coupons, and restaurants that I have found to be safe.

However, please, please, please remember, everything is always based off of your location, companies have different factories that ship to different areas, some of which may be cross contaminated, and some that may not be. The same goes for restaurants, one location may use dairy in their chicken or fries while the same restaurant in a different area may not. Always be sure to read the labels and speak with staff at the location in which you will be dining. If you are still unsure about a product, contact the company.

Now, my story. In early 2014, we were snowed in and my son, 14 months old at the time, was getting a bit frustrated with being kept inside all winter. I had fed him everything except fish before this day (dairy including milk and cheese, peanuts/peanut butter, baked goods with egg, scrambled eggs, etc). I decided to give him some apples with peanut butter and chocolate milk as a sweet treat. He ate a bit of the apples and peanut butter and drank a few sips of the milk and shortly after his bottom lip started to swell a bit. We quickly called a nurses hotline and they told us to give him some Benadryl since his breathing was not being affected. We immediately gave the antihistamine to him and the swelling went down. He had a pretty nasty rash on his body after that so we took him to the doctor and they gave us topical and oral steroids to help flush his system and get rid of the rash. After that, we decided to avoid peanuts, thinking it was the only possible allergen, which was extremely difficult because one of his favorite snacks was peanut butter trail mix.

A few weeks after this, we went out to eat. I got macaroni and cheese, bread and a soda. My husband got clam chowder, bread, a cookie and soda. We shared all of our food with him not thinking anything of it. He started to get fussy and antsy like he does when he’s been sitting too long. We finished up our meal and went to the car to head home. I buckled him in his car seat, shut his door, walked around the car to the passenger seat and when I sat down in my seat, he let out a terrible scream so I quickly turned around to see why. His lips were 3-4 times their normal size and he was scratching at them terribly so we rushed him to the ER. They gave him medication and it started to calm down but we had to stay in the hospital overnight to make sure there were no respiratory problems.

After telling several people the story. No one knew what he was allergic to, milk or peanuts so we just continued to keep peanuts out of his diet, thinking there may have been some in the cookie. After a week or so his rash from the reaction was still horrible so we bumped up our appointment at the allergy specialist. After running skin tests we were able to determine that not only was peanut a culprit , so were dairy, eggs. Because of the peanut allergy, we were also advised to avoid all tree nuts.

Now he is 2 1/2 months and it’s been a bit of a struggle. There are milk and eggs in things you would never imagine. So, I’ve learned to get a bit creative with meals and recipes and now I will share them so maybe I can help out another distressed parent of a child with these allergies!

One of the worst feelings in the world (and I know I’ve said this before) is going through the grocery store and seeing something that I’d really like to eat and knowing that I can either buy it and have my 2 year old ask for some and have to tell him he can’t have any, or just go without treating myself.
My husband is constantly asking me to make those boxed brownie mixes which call for egg, and even if I could use a substitute, the milk chocolate ones contain dairy and the dark chocolate ones are cross contaminated. It becomes very tiring very quickly knowing that we can’t all just sit down and have a nice, enjoyable treat or snack together.
I decided that I would give brownies from scratch a go and my first few times that I followed a recipe I found online, were a complete flop. The brownies were so dark that they were almost bland. My husband didn’t mind that much since he enjoys dark chocolate, but our son and myself, could not stand the bitterness of these brownies.
I started to get really discouraged because I just could not think of something to do to sweeten these brownies up. Then, one night while I was lying in bed, some substitutes hit me. I got up the next day and gave it a go and they turned out wonderfully! They turned out looking and tasting just like that box mix! Nice, moist, soft, and chewy with that nice flaky crust on the top! 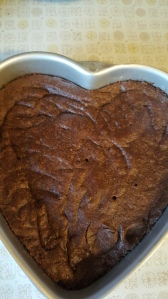 My husband loves breakfast food, but a lot of breakfast foods, in fact most, are centered around eggs and milk. I looked everywhere for pancake mixes that don’t have any egg or milk in them or aren’t cross contaminated or do not require eggs or milk but found absolutely nothing. After a bit of research and some alterations of my own, I’ve come up with this recipe.

I add dairy free butter and syrup to ours!

We love bread around here. Seriously, carbs are huge! We always seem to be having some sort of bread or pasta but it can be difficult to find good dinner rolls for big meals that don’t have some sort of dairy or egg. But lucky for you I have a great, simple recipe for dinner rolls!

Cakes are so difficult, just like a lot of other things, you grow up knowing that they are made with eggs. However, I have learned that there are many things you can make with some knowledge and experimentation. I was determined to learn how to make things like cakes so that way my son would never be without one on his birthday. Here is a delicious recipe for a dairy and egg free chocolate cake!

This recipe also works wonderfully with a cake pop maker if you have one. I went out and bought one so we could have a little bit of fun decorating them!

First, let me start off by saying I am a sucker for sweets and I like things that are simple enough that my little one can be right there helping me with and can lick the bowl clean after! I always have candy, cakes, cupcakes, brownies, etc in the house. These vanilla cupcakes are a huge hit in my house! (Even with my husband who tries to argue with eating everything dairy free that I give him!)

(This recipe makes about 10 cupcakes)

Having a child with  food allergies is difficult and to me the three hardest things about those allergies are:

(Edit: I did find that where I live that Blue Bonnet light butter is dairy free, so you might want to check it out where you are at if EarthBalance is too pricey like it was for me)

So, because of that, I haven’t been able to do a whole lot of experimenting. But I have been able to come up with a few options that won’t break the bank and can be made with ingredients that you probably already have lying around. Here is one that’s nice and sweet:

(If you’ve got some allergen friendly ice cream lying around you could always serve it with that too!)